In natural environments, microorganisms are mostly organized in the form of biofilms, composed of microbial cells and self-secreted extracellular polymers. The resulting three-dimensional organization and the microbial activity within these biofilms allow to maintain microenvironments with potentially highly contrasted physicochemical properties, including local supersaturation capable of inducing biomineralization. Although the formation of minerals induced by microorganisms is central in geochemistry, especially for metal cycling, the mechanisms of biomineralization within biofilms remain poorly understood, in particular their link with the local physicochemical properties of these structures.

This PhD work took the example of the formation of manganese (Mn) oxides induced by microorganisms to study biomineralization processes in biofilms. This choice was motivated by the central role played by Mn oxides and their strong oxidizing capability in the environment, notably in partially controlling the fate of metals, for some toxic, sensitive to redox conditions.

A laboratory study involving confocal laser scanning microscopy has first allowed to link the nature and structure of biofilms with the physicochemical properties of the microenvironments they host, potentially impacting Mn oxide formation within biofilms. This preliminary study was based on the use of Escherichia coli mutants with identical metabolism but generating biofilms with different structural and chemical properties. Second, in order to determine the impact of biological surfaces found in biofilms on the nucleation and growth of manganese oxides, polystyrene beads on which various chemical functions have been grafted have been designed. The use of liquid cell transmission electron microscopy, still not widely used in the field of geobiology, has allowed the in situ monitoring (in liquid environment) of the different stages of manganese mineralization for ten types of chemical and polymeric functions. Two regimes of mineral growth with varied kinetics could notably be highlighted for all functionalizations, with an initial homogeneous growth which evolves towards a dendritic growth of manganese oxides. This dynamic strongly depends on the nature of the grafted polymers and the functions they carry, notably their surface charge density, their chemical affinity with Mn, in addition to steric parameters. Finally, the environmental relevance of these investigations at the biofilm scale was tested at the larger scale of a Mn-rich mining site in New Caledonia, by coupling mineralogy, geochemistry, and microbial ecology approaches. 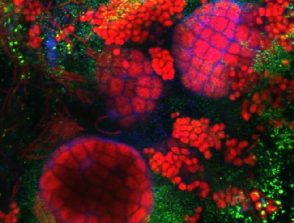