Climate evolution during the Cenozoic: impact of paleogeography, orbital parameters and CO2 on the Asian monsoon and the terrestrial biosphere

Monsoons govern the climate of a large part of Asia from the Indian subcontinent to eastern China today. However, their establishment and evolution remain debated and are regularly re-evaluated thanks to the acquisition of new climate indicators. Recent data suggest that the monsoon regime in Asia was already in place about s40Ma ago, in the late Eocene, in a globally warmer climate context and in a palaeogeographic configuration very different from today.

The aim of this thesis is to study the conditions for the development of Asian monsoons during the period 42-33Ma, encompassing the late Eocene and the major climatic transition from Eocene to Oligocene. We investigate the different fields of persistent uncertainties for this period (palaeogeography, pCO2, sea level) and the different sources of climatic variability (mainly orbital forcing). We use the earth system model IPSL-CM5A2, recently adapted to the study of paleoclimates. Using a first late Eocene paleogeography and a pCO2 of 1120 ppm, we first show that the model simulates extremely seasonal rainfall in Asia, without presenting the atmospheric circulation characteristic of monsoons.

The sensitivity of the late-Eocene climate and vegetation cover to the orbital parameters is then evaluated through various sensitivity tests. We show that orbital variations may have been a major forcing of climate and biological variability in Asia. Configurations favoring strong inter-hemispheric thermal gradients (via strong obliquities and/or precessions inducing warm boreal summers), by causing increased migration of humid equatorial air masses over the continent, generate seasonally very humid climates in summer over Southeast Asia. More generally, the vegetation cover also appears to be very sensitive to orbital variations in the subtropics and high latitudes. These results open new perspectives for reflection on possible relationships between orbital forcing, climate and the opening of dispersal corridors for Asian fauna towards Europe and America (the so-called Grande Coupure phenomenon).

Finally, we compare the atmospheric circulations generated by alternative palaeogeographic reconstructions of the Asian region. They test, for example, different altitudes of the Tibetan plateau and different morphologies of the initial phase of the collision between India and Asia, both of which are still the subject of much debate. Finally, these results are put into perspective by comparing them with climate simulations at s34, s20 and s10 Ma. The simulated climate in Asia finally appears to be very insensitive to local changes in the Indo-Tibetan palaeogeography. Conversely, we note the progressive appearance of the pressure fields and winds characteristic of monsoons as the withdrawal of the Paratethys Sea and the closure of the Neotethys Ocean allows the exposure of the Arabian Peninsula and Central Asia, thus greatly increasing the continentality of the region. We thus suggest that the thermal gradients induced by the Asian continentality on a geological time scale, or by favorable orbital parameters on a time scale of a few thousand years, constitute the dominant forcings of the monsoon regime in Asia. 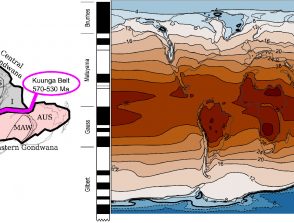 Paleomagnetism
The research carried out by the research group is based on the analysis of the magnetic properties of geological and archaeological materials, to whic...