Tephro and cryptotephrostratigraphy of deep-sea marine sequences. What could be learnt from Montagne Pelée volcano and Young Toba Tuff eruption?

Understanding past volcanic history in terms of frequency, chronology, magmatic evolution and eruptive dynamics is a fundamental and crucial challenge for volcanic hazard and risk assessments. On-land sequences are often incomplete because of the sedimentary gaps due to the erosion and/or burial of deposits following recent eruptions as well as recurrent destructive events (i.e. volcano flank-collapse events). Variable and inter-related factors such as eruption size, magma production rate, magma composition, eruptive style, and age, nature and thickness of deposits may contribute to the low preservation potential of volcanic deposits, promoting under-recording of past activity. In contrast, large-scale events are more likely to be documented by geological archives over time because of the emission of large amounts of ash that are easily transported distally before being deposited as tephra fallouts in the underlying landscape. In this context, marine deposits can be a very useful archive for constraining more precisely the chronology and the characteristics of eruptions because they better preserve volcanic products over time.

In this thesis, we presented two marine tephrostratigraphic studies with the aim of reconstructing the volcanic and magmatic history of Montagne Pelée activity during the last 130 ka (Martinique, Lesser Antilles arc) and investigating over time the super-eruption of Youngest Toba Tuff that occurred about 74 ka ago in the island of Sumatra (Indonesia). We studied the pristine glass fragments of volcanic products preserved in two separate marine sedimentary records (U1397A and BAR94-25). Using a multidisciplinary investigative approach combining tephro-chronostratigraphic observations (δ18O) and in-situ geochemical and textural analysis of the volcanic glasses, we were able to more accurately identify the construction phases of Montagne Pelée during its active period and to reconstruct the chronicle of the Youngest Toba Tuff eruption at very high temporal resolution and over a longer time span.

In particular, we revisit the chronology of Montagne Pelée by extending the duration of the Old-Pelée activity from ~50 ka to > 130 ka (likely up 190 ka) and the intermediate stage (Grand Rivière stage) from 20 to ~50 ka. For the first time, we identify numerous products of Paleo Pelée activity (50-130 ka) that show more evolved felsic magma compositions than the younger stages.

Additionally, we record several pyroclastic flows originated from South Dominica, whose activity concentrate over four main periods covering the Roseau Tuff sequence (37-41 ka), the Layou ignimbrite (~65 ka) and the flank collapse of Plat Pays Volcanic Complex. We suggest that this destructive event may have occurred at multiple times between 87-98 ka.

Regarding the Youngest Toba Tuff eruption, we propose a new eruptive scenario, suggesting not a single short-lived cataclysmic eruption at ~ 74-75 ka, but rather an enduring series of several volcanic episodes. On the basis of textural analysis and specific trace element ratios (e.g. U-Th, Hf-Ta, Ba-Y), we show that this volcanic activity is actually composed of multiple Plinian eruptions divided in three main activity periods: the Pre-YTT activity (VAP1, 101 to ~79 ka), the paroxysmal YTT activity lasting (VAP2, ~75-65 ka) and the Post-YTT resurgent activity (VAP3, ~63 to at least 49 ka). Accordingly, we provide new working hypothesis to better reconstruct the YTT eruptive sequences, in terms of chronology, duration and magnitude, as well as to assess its potential climate and environmental impact at a global scale. 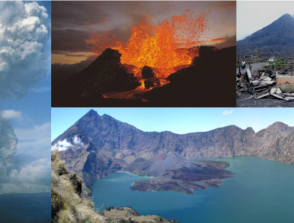