Since May 2018, the Comoros archipelago has experienced an unprecedented volcano­seismic crisis. In the first year, hundreds of earthquakes were detected east of Mayotte, the easternmost island of the archipelago, in a previously seismically quiet region (Bertil et al., 2022). The associated construction of a new submarine volcanic edifice whose volume is currently 6.55 km3 (Feuillet et al. 2021) has brought to light the need to reassess volcanic and seismic risk in Mayotte. This reassessment requires an understanding of the underlying magmatic system.

One of the data sets allowing us to understand this system dating from the beginning of the crisis is seismicity. Although only one seismic station was present on Mayotte before the crisis, the establishment of the REseau de surveillance VOlcanologique et SIsmologique de Mayotte (REVOSIMA), has supplemented the seismic network with permanent stations and ocean bottom seismometers. Seismic data are abundant and their quality is continuously improved. Work on earthquake relocation (e.g. Lavayssière et al., 2022) has shown the spatio­temporal distribution of seismic foci, distinguishing two seismic swarms: 1) a distal swarm which started as early as May 2018, with earthquakes migrating upwards (from 40 to 20 km depth) and then southwards (Cesca et al., 2020), and 2) a proximal swarm starting after June 2018. The latter has a conical shape (Lavayssière et al., 2022) and is located under a caldera­like seafloor structure (Feuillet et al,. 2021).

The first seismic studies have allowed us to propose a first model of how the eruption is fed, with magma migration along a sub­vertical fracture (generating the distal swarm) from a deep reservoir (40 km or more) near Mayotte. The collapse of the roof of this reservoir is believed to be at the origin of the proximal swarm. Although it now seems clear that both swarms are linked to magma movements within a deep system, the source magma chamber is poorly constrained and its structure has not been studied in detail. Indeed, only basic modelling of Mogi or pCDM type deformation sources has been carried out (REVOSIMA bulletins, Lemoine et al., 2020). Due to a non­optimal geodesy network configuration (most stations are GNSS­based on land to the west of the source), it has not been possible to accurately constrain the location of the deep deflation source(s). It is of utmost importance to understand the layout of a magmatic system in order to assess the risks associated with it.

The aim of the proposed thesis is to study the magmatic system off Mayotte by numerical modeling. The modelling will be done using COMSOL, a multiphysics finite element software commonly used in volcanology works. The objective will be to relate the magma system models to observed earthquakes by calculating the strain and stress fields generated by magma pressure and movements within the feeder system. The student will determine the zones prone to fracturing via rupture criteria (Drücker­Prager, Mohr­Coulomb…) and evaluate their correspondence with the distribution of earthquakes. He/she will also look at other data such as surface displacements in order to constrain model sources. He/she will test different components (reservoirs, faults, …) that could explain the distribution of earthquakes and will propose hypotheses on the structure and dynamics of the system. The study will initially focus on the structures at the origin of the proximal swarm, first by approximating it by an axisymmetric structure, then by examining the possibilities of pre­existing faults and the influence of regional constraints. The study will then extend to the distal swarm and the interactions between the two swarms. This project will bring elements of understanding of the origin of the crisis, still poorly understood due to the lack of observations before 2018. This project will also benefit from data from another thesis already in progress at IPGP, studying geodynamics at the scale of the Comoros through structural geology.

An important contribution of this work will also be the elaboration of scenarios of future evolution of the crisis, a fundamental aspect of risk management and prevention. For example, the hypothesis of a deep reservoir connected to a caldera up to the surface (Feuillet et al., 2021) raises the risk of collapse or explosive eruption; a complex volcanic system close to Mayotte also generates the possibility of volcanic activity on the flanks of Mayotte, or even on the island. The modeling approach will allow to test and refine these hypotheses. 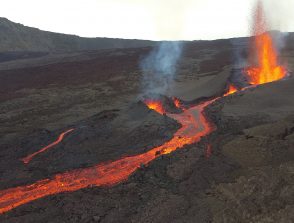 Volcanological Observatory of Piton de la Fournaise (OVPF-IPGP)
Within the framework of the observation national services of the CNRS-INSU, the IPGP assignments, via the volcanological and seismological observatory...